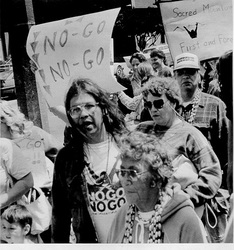 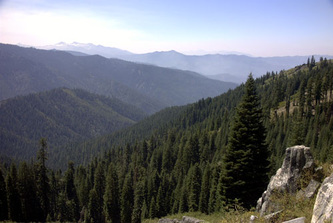 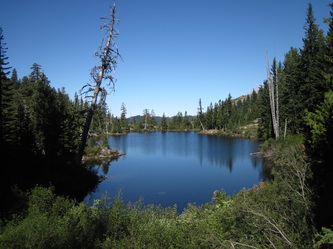 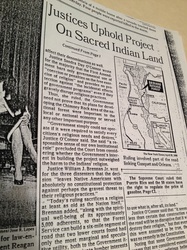 Legal scholars remember Lyng for its narrow construction of the First Amendment, in which the Supreme Court found the Free Exercise Clause somehow inapplicable to the protection of Indian religious practices that occur at sacred sites. Others remark on Lyng’s broad formulation of property rights, in which the government’s ownership of the public lands gave it the right to destroy sacred sites. Lyng is also infamous for making a mockery of the federal Indian trust doctrine— where the government not only failed to protect, but actually sought to harm, Indians’ most precious resources—and the Supreme Court allowed it to happen.  While Lyng deserves this notoriety, an exclusive focus on defects in the holdings obscures other important dimensions of the case, and in particular the tribal side of the story in Lyng.  Our article, which draws on original interviews with tribal members and leaders, and covers recent legal developments in the religious freedoms arena, aims to enlarge understanding of Lyng beyond its conventional treatment in the literature.  Our piece focuses on the tribes’ traditional relationship with their sacred lands, and the ways in which the tribes have maintained that relationship before, during, and after conquest, including through community and legal activism.  We note that despite all of the government’s efforts, the sacred “High Country” was not destroyed and the tribal cultures were not demolished. Indeed, the religions are now flourishing, albeit with modern challenges, and the Tribes are newly revitalized as cultural and political entities.  The Religious Freedom Restoration Act and federal regulations now empower tribes to consult with the United States on a nation-to-nation basis regarding the use of sacred sites and other religious freedoms.  In the final analysis, Lyng remains an unjustifiable decision about American Indian religious freedoms and property rights, a judicial attempt to reify the rules of conquest.  And yet, from the Tribes’ perspective, the case also stands as a powerful testament to Indian cultural survival against great odds.

Indigenous peoples in California have had a relationship with their land since time immemorial. Tending to the land and gathering traditional materials for basketry, regalia, etc., continues to be of great spiritual and cultural importance for Indian people. However, contemporary laws passed by both the federal and state governments seek to inhibit how Native people interact with their traditional territories. The politics of wilderness, conservation, the Supreme Court ruling of Lyng v. Northwest Indian Cemetery Protection Agency 1988, and laws like the Marine Life Protection Act, are a challenge to the inherent sovereignty of Indian tribes in California. The goal of this presentation is to make Indian people visible and dispute myths of wilderness which have direct negative consequences for traditional practices. I hope to illuminate how the law in California seeks to detract from tribal sovereignty and criminalize tradition. Perhaps more importantly, I seek to emphasize the resistance of contemporary Indigenous peoples in California, and their refusal to be separated from their land.

Stephanie Lumsden is an enrolled member of the Hoopa Valley Tribe. She is currently a MA student in the Native American Studies department at the University of California, Davis. In 2011 Stephanie received her BA in Women’s Studies with a Minor in Native American Studies from Portland State University. While at Portland State University she also earned recognition for academic excellence and was placed on the Dean’s List. Her thesis research focuses on Native American women and the prison-industrial complex in California, Federal Indian Policy, political economy, California Indian history, and California Indian basketry.

The Gasquet-Orleans (GO) Road, a US Forest Service timber road meant to cut through what the Yurok, Karuk, and Tolowa, consider “high” or scared country, kick-started a political battle that incorporated Indian land rights and the American Indian Religious Freedom Act of 1978. It also revived Indian activism and Indian resistance in an area that was historically hostile and violent toward the Native American tribes that populated the region. Indian activism in Northern California grew out of the four tribe’s cultural ties to the land. The tribes of the Northwest Coast actively resisted, and continue to resist, what they view as the negligent practices of private businesses and government agencies responsible for environmental stewardship of their traditional territories.

The “GO” Road activism, and the subsequent Supreme Court case that arose from it, Lyng v. Northwest Indian Cemetery Protective Association, shaped the modern environmental, Indian activism that continues in contemporary Northwestern California. The tribes of Northern California, from the earliest colonization efforts, actively resisted those who sought to colonize them. The examples of past and present activism define the struggles of Northern California Indian tribes to achieve recognition as environmental stewards of territories they have held in trust for thousands of years.  The paper will evaluate place and environmental memory as influences to contemporary California Indian activism. Ultimately, cultural memory and ceremony influenced and continues to influence  environmental activism, seen in the examples of the “GO” Road and Klamath River Dam removal, for the Hupa, Yurok, Karuk, and Tolowa tribes.

Brittani Orona is an enrolled member of the Hoopa Valley Tribe and is currently completing her Master of Arts in Public History at California State University, Sacramento (CSUS). She graduated with a Bachelor of Arts in History from Humboldt State University in 2010. She has worked at the California State Indian Museum, the California State Office of Historic Preservation, and the Maidu Museum and Historic Site. She is currently a Graduate Student Assistant at the California State Archives.  After completing her Master's Degree, she hopes to continue  her  education at either  UC Davis in Native American Studies or UC Santa Barbara in Public History. Brittani is interested in Repatriation, Federal Indian Law, and Environmental history as they relate to California Indian tribes.

11:00 - 11:30 a.m: We Fought For Things That Were Right: The Role of NICPA in the Struggle to Stop Grave Looting and Protect Native Cultural Rights --- Tony Platt, Professor of Justice Studies, San Jose State University 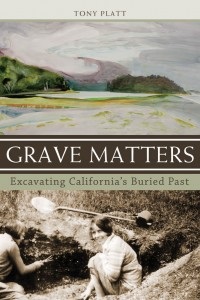 The Northwest Indian Cemetery Protection Association (NICPA), an inter-tribal non-profit organization, was officially established in 1970. Its first chairman, Milton Marks, and its second chairman, Walt Lara, Sr., were well known Yurok leaders. In 1988, NICPA gained national prominence for its role as the respondent in the “G-O Road” U. S. Supreme Court case involving Native American religious access to public lands. But long before that case was settled, the Association’s militancy and activism in California generated widespread recognition and a flurry of results. NICPA was very likely the first organization in the United States created to specifically halt the desecration and looting of Native cemeteries. But it wasn’t a one-issue organization. It fought for a variety of cultural rights and operated on many fronts – legal, legislative, educational, and grassroots – and gave voice to a new wave of leaders, women and men, who demanded respect and justice. This talk is based on information from NICPA’s internal papers, research in local archives, and interviews with NICPA members.

Tony Platt is the author of ten books and 150 essays dealing with issues of race, inequality, and social justice in American history, including Grave Matters: Excavating California’s Buried Past (Heyday 2011). He taught at the University of Chicago, University of California (Berkeley), and California State University (Sacramento). He is currently Visiting Professor in Justice Studies at San José State University. He lives in Berkeley and Big Lagoon, and serves as secretary of the Coalition to Protect Yurok Cultural Legacies at O-pyúweg (Big Lagoon).

American citizens commonly perceive the judiciary as the final and supreme arbiter of constitutional politics. According to this view, once a constitutional question or dispute over rights has run its course through the courts, the nation is presented with definitive answers. Unfortunately, this popular view can offer an inaccurate picture of American jurisprudence. In fact, even momentous losses before the Supreme Court can spark positive social, political, and legal change. By comparing the constitutional narratives of Native Americans, African Americans, and other minorities, I will demonstrate how Hegel’s theory of dialectic can help us to better understand the inherently conflictual and evolving nature of our system of rights.

But the question remains: how and when can such constitutional defeats be beneficial? I combine my recent research on the Lyng decision and its effects on the Yurok, Karuk, and Tolowa tribes with the work of diverse political thinkers such as G.W.F Hegel and Bruce Ackerman to explain the factors that have led to positive political transformation after legal defeat. As will become clear, there are several factors that describe why northern Californian Native Americans, after Lyng, witnessed some but not all of the gains that other minority groups have witnessed after legal defeat.

Before Lyng v. Northwest Indian Cemetery Association reached the Supreme Court, a solution meeting the needs of both the Forest Service and American Indian community was formulated by the Advisory Council on Historic Preservation, but was ignored by the Forest. We briefly review the failure of the cultural resource management process that led to this outcome, then examine how federal agency practices have evolved in the last 25 years. Finally, we suggest how agency consultation and compliance, as well as the underlying laws and regulations can be improved to ensure that traditional cultural practices and rights are respected without creating an adversarial environment.